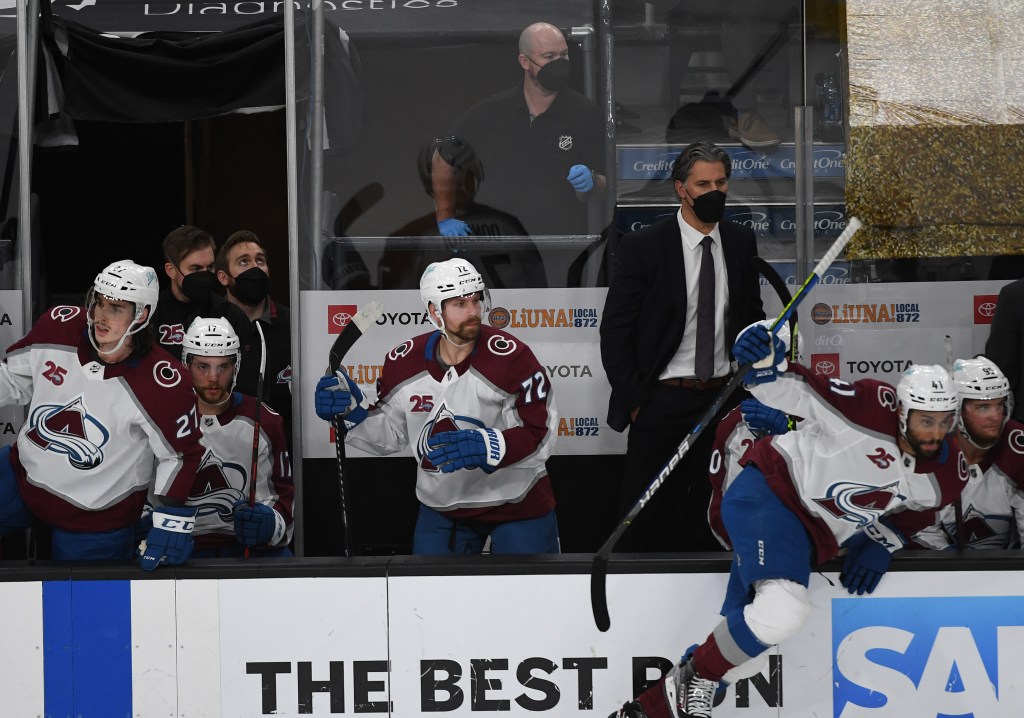 LAS VEGAS — In the end, it was a colossal Colorado collapse by the NHL’s Presidents’ Trophy champions.

A club-record 6-0 start to the Stanley Cup playoffs somehow morphed into a four-game losing streak, capped off by a 6-3 loss to the Vegas Golden Knights in Game 6 here late Thursday.

Colorado lost four consecutive games for the first time this season and was eliminated in the second round of the playoffs for the third straight year.

“It just hurts,” Avs coach Jared Bednar said. “Got to tip your hat to Vegas. Great hockey team and they played real well. They were consistent. We just couldn’t get the job done.”

The Avs, who scored 23 seconds into the game at T-Mobile Arena and controlled the pace for much of the game, went down fighting at what the Golden Knights dub the “Fortress.” But two Colorado defensive-end turnovers led to Vegas goals — a repeat of what went wrong in Game 5’s 3-2 overtime loss at Ball Arena.

Avs defenseman Sam Girard was minus-4 and misplayed a zone exit that led to Vegas’ second goal and a 2-1 lead. Defenseman Patrik Nemeth committed a turnover late in the second period that led to the Knights’ fourth goal and a 4-3 lead.

“It’s a game of mistakes and the margin of error is real slim. That’s the end of it,” Avs captain Gabe Landeskog said. “Hard-fought series. There are moments in the series where things went wrong for us, where we’re going to have to learn from and minimize some of those mistakes.”

Vegas, which added a goal from William Carrier midway through the third period and an empty-netter with 3:10 to play, became the fourth team in NHL history to win a best-of-seven series against the league’s No. 1 seed after losing the first two games. Chicago did so in 1962 and 1965, and Boston in 2011.

Vegas advances to play the Canadiens in the semifinals.

“There’s always next year. That’s all we talk about, I feel like,” said Avs star center Nathan MacKinnon, who had a strong Game 6 (two assists) after struggling in the previous three games. “I’m going in my ninth year next year and I haven’t won (crap). I’m definitely motivated. Just sucks, losing four in a row to a team. I felt like last year was our first real chance to win and this year I thought we were the best team in the league.”

Vegas scored two goals in the first period and another two in the second en route to a 4-3 lead, though being outshot 22-16 to that point.

With the score tied 2-2, Grubauer wasn’t to blame on a lucky bounce off the stick of fourth-line forward Keegan Kolesar, who was not in a position to score. But after the Avs forged a 3-3 tie on the first goal of the playoffs by winger Andre Burakovsky, Vegas scored with 18 seconds left in the period to regain a lead it would not give up.

It was an ugly breakdown, another failed defensive-zone exit, this time by Nemeth, whose back-hand chip off the glass was blocked by center Chandler Stephenson. The puck went to Alex Tuch, who intentionally caromed it off the end boards behind Grubauer. Defenseman Alex Pietrangelo read the play, pinched in and beat the sprawled Grubauer with plenty of net to shoot at.

The Avs got second-period goals from Mikko Rantanen (power play) and Burakovsky to forge 2-2 and 3-3 ties. Rantanen capitalized on the game’s only penalty through 40 minutes — Pietrangelo’s delay-of-game for shooting the puck out of play.

The Avalanche looked at times as if was destined to force Game 7 on Saturday in Denver.

“We had it in our hands and it slipped away,” Rantanen said. “This stinks the most, for sure, because the team we had, and the potential we had this year, the way we played. I really don’t even know what to say here.”

The Avs had a great start, scoring 23 seconds into the game. But Vegas took a 2-1 lead into the first intermission and Girard was minus-2. Girard wasn’t to blame on the first goal-against — that was mostly on Grubauer — but he and Landeskog messed up a zone exit that led to Vegas’s second score.

At 1-1, Landeskog was first to the puck on a Vegas dump-in. He had pressure from Knights forward Jonathan Marchessault but support from Girard — and an option to pass it to Cale Makar behind the net. But Landeskog slid it up to Girard, who looked stuck in mud. William Karlsson gained possession, slid the puck to defenseman Alec Martinez and he hammered in the return pass.

Vegas defenseman Nick Holden, the former Av, tied it 42 seconds after the Avs opened the scoring on the first shift of the game — with Devon Toews’ wrister off a rush pass from MacKinnon. Holden shot from the blue line near the end boards and the puck found its way past Grubauer, who appeared to expect Holden to dump it in the corner.