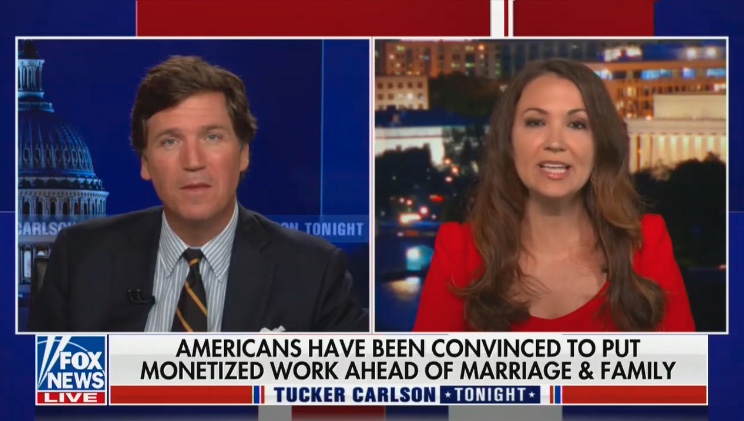 After tsk-tsking young women who don’t want to have kids earlier on his show Thursday night, Tucker Carlson’s Great American Fertility Crisis continued into the latter half. After pointing out that the United States experienced its lowest birth rate on record last year, he turned to Rebeccah Heinrichs of the Hudson Institute. She said the problem is a “cultural dogma” that teaches young women and girls to “monetize their talents and abilities.”

“Well, most people point to the economy as the driver of the problem,” she said. “People just aren’t having kids because they can’t afford it. And I think there’s actually a culture driver going on, Tucker. Really, there’s this cultural dogma that’s telling little girls that their greatest value in society is to the extent they can maneuver to monetize their talents and abilities.”

She criticized President Joe Biden for proposing a plan to provide daycare to millions of children under the guise of  getting “bodies into the workforce.”

“It’s essentially, Tucker, you could say ‘handmaids of capitalism’ that’s being pushed,” she said.

Heinrichs then offered her advice to young women: “Get married and have children, to continue to do good, continue to work, continue work – monetized or not – but to the extent it works for your family. And that’s where you’re going to find great happiness and you’re going to have a healthier society if you do that.”

Carlson responded, “It’s such corporate propaganda. Is there anyone on his deathbed or her deathbed who thinks, man, you know I’m just so glad about the raise I got at Citibank.” He added, “None of that means anything.”

“I’m not saying that women shouldn’t work,” said Heinrichs. “What I am saying is that they should prioritize what is most important before time runs out. And not just having children, but having children–takes time, nurturing children takes time, and the self-sacrifice brings out great joy.”

“Boy, we’ve really been sold a bunch of lies.” said Carlson. “No wonder everyone’s so unhappy.”

Watch above via Fox News.