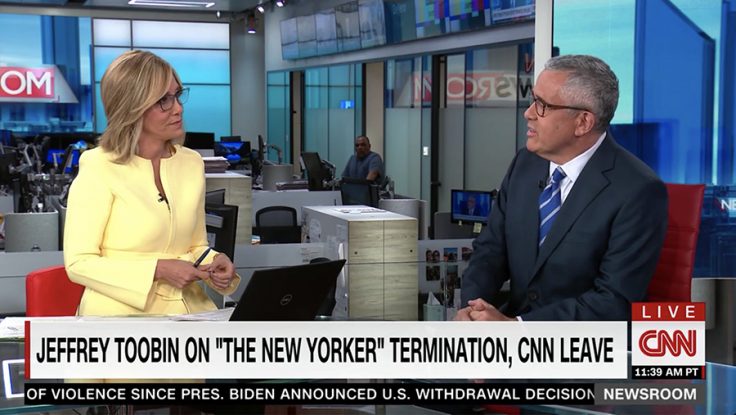 Camerota introduced Toobin by laying out the details of the incident. “I feel like we should address what’s happened in the months since we’ve seen you, since some of our viewers may not know what has happened, so I guess I’ll recap,” she said. “In October, you were on a Zoom call with your colleagues from the New Yorker magazine. Everyone took a break for several minutes, during which time you were caught masturbating on camera. You were subsequently fired from that job after 27 years of working there, and you since then have been on leave from CNN. Do I have all that right?”

She did. Toobin began with a qualified defense of his actions during that fateful call. “I didn’t think other people could see,” he said. “That is part of the story.” He went on to describe the “miserable” seven months he has spent “trying to be a better person” by going to therapy and working in a food bank.

“I’m a flawed human being who makes mistakes,” said Toobin, who once had a nearly decade-long extramarital affair with Casey Greenfield, the 20-something daughter of a former CBS colleague. When Toobin’s mistress informed him she was pregnant, according to the New York Times, he “questioned the paternity, balked at submitting to a test, and vowed to take no responsibility for a baby he wasn’t sure was his.” He eventually acknowledged paternity after being sued for child support.

Toobin did his best to assure viewers that his days of sexual misadventure were behind him.”I don’t think there is anything further that is going to come out,” he said, inartfully.

We can only hope.