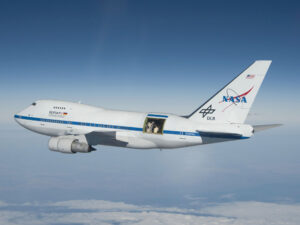 WASHINGTON — Despite facing the threat of cancellation for the second straight year, a NASA airborne observatory is continuing with regular operations.

NASA’s fiscal year 2022 budget request, released May 28, included a proposal to end the Stratospheric Observatory for Infrared Astronomy (SOFIA), a modified Boeing 747 equipped with a 2.5-meter telescope to perform infrared observations. The agency argued in its budget justification that the high cost of operating SOFIA, about $85 million per year, was not justified given the low scientific output of the observatory.

The proposal marks the second year in a row, and third time in eight years, that NASA proposed shutting down SOFIA. In both its fiscal year 2015 and 2021 budget requests, NASA proposed terminating SOFIA, only to have Congress reject the proposal and fully fund the project.

A SOFIA official, speaking at a June 9 session of the 238th Meeting of the American Astronomical Society, did not sound alarmed by the latest proposal to cancel the observatory. “We’ve been in this place before where the president doesn’t have us in the budget,” said Margaret Meixner, director of SOFIA science mission operations at the SOFIA Science Center. “We are planning for success.”

That planning includes regular flights of the observatory out of its home base in Palmdale, California. SOFIA is in the final weeks of a series of observations called Cycle 8, scheduled to conclude in early July. That will be immediately followed by the next series of observations, Cycle 9, that will include a deployment starting in July to French Polynesia for Southern Hemisphere observations.

Demand remains high for SOFIA, Meixner said, with an oversubscription rate, the ratio of the amount of observing time requested in proposals to the amount of time available, greater than four in Cycle 9.

“We have a lot of great science to look forward to in Cycle 9,” she said. The project is preparing to proceed with a call for proposals for the round of observations, Cycle 10, in the fall.

NASA hasn’t elaborated on the reason its budget proposal once again sought to terminate SOFIA beyond its high cost — only Hubble has a higher operating cost among astrophysics missions in operation — that the agency deemed was not justified by its scientific productivity. NASA previously sought to address this with studies looking for ways to improve its performance or, in the words of one official, “more discoveries per dollar.”

“This is the administration’s proposal to the Congress, which will have to decide whether to accept that proposal,” Paul Hertz, director of NASA’s astrophysics division, said at a June 2 meeting of the Astronomy and Astrophysics Advisory Committee.

He added that his concern is that Congress may decide to restore funding for SOFIA, but not increase the overall astrophysics budget, which is what happened in fiscal year 2021. “I hope that any uppers that Congress wants us to do, they add the money to the budget, whether it’s SOFIA or any other project,” he said.