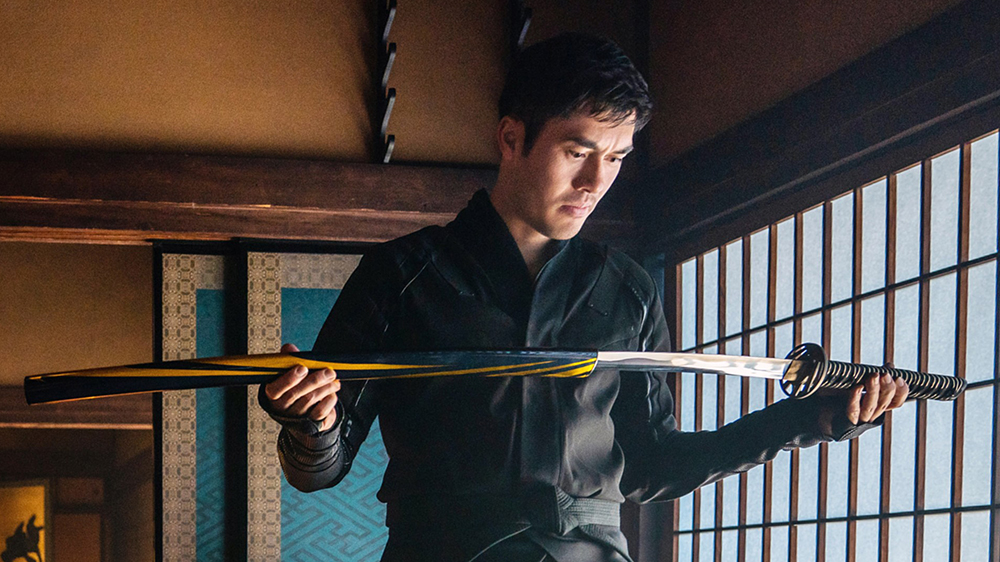 “Snake Eyes,” as directed by Robert Schwentke (“The Divergent Series: Insurgent”), has style and verve, with a diabolical family plot that creates a reasonable quota of actual drama. The movie is also a synthetic but infectiously skillful big-studio hodgepodge of ninja films, wuxia films, yakuza films, and international revenge films. The combat scenes are staged with a slashing precision, and the whole movie, as shot by the cinematographer Bojan Bazelli, has an enveloping night-bloom look to it. For a kids’ franchise movie, it’s pretty good, but the main headline is this: Henry Golding has to be seriously considered for the role of James Bond. “Snake Eyes” makes it clear that he’s got the beauty, the cool, the glamour, the danger, the magnetism, and that essential Bond quality — the ability to telegraph the most lethal thoughts to an audience without saying a word.

Golding’s Snake Eyes got his nickname from the way his father died. An assassin, infiltrating a safe house, asked the father to roll a pair of dice; it came up snake eyes, which meant his number was up. When we meet our hero as an adult, he’s a cage fighter, beholden to nothing but his own preservation. So when Kenta (Takehiro Hira), a yakuza ringleader with close-cropped hair and an imperious sneer that may remind you of James Spader’s Red on “The Blacklist,” tries to hire him after a fight, he’s not interested. That is, until he learns what’s being promised in the bargain: that Kenta will find his father’s killer. That’s the one thing Snake Eyes cares about. Amid the cutthroat fireworks of the ninja attack that follows, he saves the life of Tommy (Andrew Koji), a fighter with a lean, malevolent smolder. He gets taken under Tommy’s wing, and Golding is such a good actor that he makes us believe in the depth of this bond.

But it’s actually a one-way brotherhood. Tommy is the heir apparent to the Arashikage clan, who reside in an elegant fortress compound on the outskirts of Tokyo. He wants to bring Snake Eyes into the fold ­— but the other clan members are a little “Godfather”-ish about it. They don’t trust anyone who isn’t family. That gives the tension between Snake Eyes and Akiko (Haruka Abe), the clan’s security expert, in her medieval bangs, a delectable snap. She neither likes nor approves of him, but there’s a hostile erotic spark between them that’s all the more enticing for not being consummated.

To join the clan, our hero must pass a series of three tests, the last of which could kill him, and “Snake Eyes” makes them surprising enough to enthrall us. The film was written by Evan Spiliotopoulos, Anna Waterhouse, and Joe Shrapnel, from a story by Spiliotopoulos, who has proved to have a rare gift for adding real flesh to the bones of genre material. Snake Eyes’ attempt to forge his way into the clan has some punch to it. He must win over such skeptics as the pitiless Hard Master (Iko Uwais) and the all-seeing Blind Master (Peter Mensah), and even the treacherous third test, which turns out to be a pit battle with three giant anacondas that might have been animated by Ray Harryhausen, carries a Zen psychological snap.

What we learn, before long, is that Snake Eyes is serving two masters. Golding makes him seem the soul of honor, and a man who longs for a home, except that he’s not behaving honorably. He’s torn between loyalty and vengeance ­— or, rather, between two types of loyalty (since the vengeance he seeks is about loyalty to his father). He’s tearing himself apart. Schwentke turns the clan compound into a mossy garden of suspense, mixing in blazing motorcycle rides and fights in the rain against hot splashes of Tokyo neon.

“Snake Eyes” is, of course, an origin story, but what struck me watching it is how much that form now bridge franchises and genres. G.I. Joe isn’t (quite) a superhero, but the movie sometimes feels like a Marvel kickoff with touches of “Batman Begins.” It’s got enough pulsating action-for-its-own-sake that, at moments, it could be a “Fast and Furious” spinoff. The villains, who are hooked up with the omni-tentacled terrorist underworld syndicate Cobra, might be the masterminds in almost any outsize global thriller. By the end, when Snake Eyes learns that his father was a “Joe,” we’re primed for the entire G.I. Joe series to become a reboot of itself. Movies now seem stuck in rerun mode, but the pleasure of “Snake Eyes” is that it succeeds in making a rerun feel like something you haven’t seen before.