Authored by MN Gordon via EconomicPrism.com, 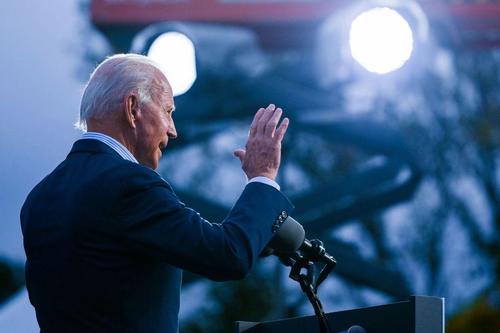 The leaders of major carbon emitting nations joined virtually and pledged to decarbonize the global economy.  Biden even said he’d launch an international climate finance plan to underwrite it.

The virtual summit was a bullet point in Biden’s January 27, 2021, climate crisis executive order.  The stated intent of the order is:

“…to tackle the climate crisis at home and abroad while creating good-paying union jobs and equitable clean energy future, building modern and sustainable infrastructure, restoring scientific integrity and evidence-based policymaking across the federal government, and re-establishing the President’s Council of Advisors on Science and Technology.”

The virtual summit, as far as we could tell, was a grand exercise in flattery and flagellation.  It was also a smoke and mirrors cover for something entirely different.

Here at the Economic Prism we find the term ‘climate crisis’ to be disingenuous.  Weather is weather.  Sometimes there are fires and floods and hurricanes and blizzards and heatwaves.  There always has been.  Always will.

The fact that weather is now somehow a climate crisis is big government seizing an opportunity to remold the world nearer to the heart’s desire.

You see, the supposed climate crisis has nothing to do with saving the whales.  Like all good central plans, it has everything to do with wealth redistribution.  A key feature involves cancelling certain industries while propping up others, like solar and wind power generators.  It also involves capturing and redirecting massive amounts of capital.

What to make of it…

Cheap, abundant, clean energy is a commendable goal.  We’re all for it.  And if it creates new jobs and industries, all the better.

But like all of mankind’s top achievements, private inventers – through ingenuity, experimentation, and repetition – stand the best chance at really attaining it.  Curious individuals will triumph through relentless trial, observation, testing, refinement, and ultimate discovery.  We have it on good authority of new breakthroughs occurring in this realm each and every day.

Team Biden-Harris, and their army of planners, won’t get us anywhere close to cheap, abundant, clean energy.  That’s not their goal either.  Their goal is massive wealth redistribution.  And to help bring this to fruition they’re putting arsonists in charge of fighting fires.

For example, last month the Federal Reserve, the central bank to the U.S. government, created a Financial Stability Climate Committee and a Supervision Climate Committee.  According to Fed Governor Lael Brainard:

“Climate change and the transition to a sustainable economy also pose risks to the stability of the broader financial system.  So a second core pillar of our framework seeks to address the macrofinancial risks of climate change.”

Treasury Secretary, and former Fed Chair, Janet Yellen, is also hip to the climate crisis.  This week the Treasury Department announced its plans to fight climate change through fiscal policy.

The Treasury is even creating something called a “Climate Hub” to save us from the weather.  John E. Morton, an Obama administration retread, and climate finance buff, will be the new hub’s leader.

It’s an important new position at the Treasury Department, if you ask Yellen.  Because Yellen considers climate change an existential threat.  She even offered the following insights:

“The steep consequences of our actions demand that the Treasury Department make climate change a top priority.  Finance and financial incentives will play a crucial role in addressing the climate crisis at home and abroad and in providing capital for opportunities to transform the economy.”

You can see where this is going, right?

The central planners are setting the stage for epic, government directed renewable energy boondoggles.  A full-tilt raid on the public purse that will make everyone rich – except you.  Printing press money will be distributed to mega solar and wind generation programs as a matter of monetary and fiscal policy.

What’s lost in all this is central bankers, more than anyone else, are responsible for polluting the earth and filling it with carbon emissions.  As a group, the finger prints of central bankers can be found all over the degradation of the environment and emissions of greenhouse gases.  Yet now, it’s as if these arsonists are being put in charge of fighting fires.

The connection between central bankers and carbon emissions may seem a bit abstract at first.  But it’s really not.  Central bankers, including the Federal Reserve, provide credit.  Moreover, through their policies of unrelenting credit expansion they provide excess credit.

The flipside of credit, remember, is debt.  And debt comes with borrowing money.  And borrowing money pulls production and consumption from the future into the present.

Thus, if you take a chart of global CO2 emissions over the last 80 years and compare it with a chart of U.S. Debt and Rest of the World Debt, the trajectories bear an uncanny resemblance.  Correlation does not imply causation, and we haven’t done a regression analysis to confirm it…

But we have a hunch that without the explosion of central bank created credit over the last 100 years, and the relentless production and consumption binge it has fostered, greenhouse gas emissions would be far less.

Printing press money and unlimited debt, courtesy of central bankers, has resulted in trillions in wasteful spending…not to mention financing of endless wars.  These actions, no doubt, step down with a weighty carbon footprint.

Indeed, there’s something remarkably insincere about the Federal Reserve and the Treasury lining up behind the supposed climate crisis.  They’re the grossest polluters of all!

And Team Biden-Harris, under the guise of climate crisis, have established a coordinated attack with the Fed and Treasury to redistribute wealth and muck with the lives of millions unconditionally.