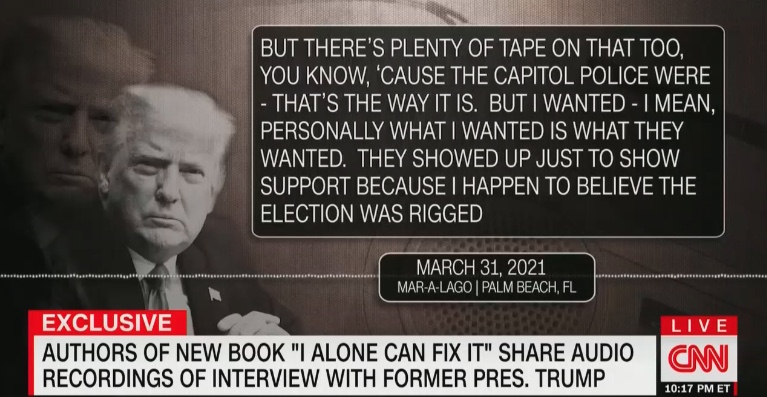 Anderson Cooper hosted the authors of the new book I Alone Can Fix It, who provided CNN with exclusive audio of an interview they conducted with former president Donald Trump in Mar-a-Lago in March.

Washington Post reporters Carol Leonnig and Philip Rucker joined Cooper Wednesday to discuss their book, as well as the audio.

“That wasn’t my rally per se,” said Trump, of the January 6 rally at the Ellipse in Washington, D.C. Trump gave the keynote speech at the event, during which he repeated the false claim that the 2020 presidential election had been stolen from him. Later that day, a violent mob stormed the Capitol in an attempt to overturn the election as lawmakers were certifying it.

Trump claimed he would not have urged the crowd to enter the Capitol, but said that “they were ushered in by the police. I mean in all fairness, the Capitol Police were ushering people in.”

The ex-president claimed police and the trespassers were “hugging.”

Rucker asked, “Did you need better lawyers? Because they took it to court…”

Trump baselessly claimed that “thousands” of dead people “voted” in the election, as well as “illegal immigrants.”

“Take all of the dead people that voted,” he said. “and there were thousands of them by the way. We have lists of them, obituaries. If you take the illegal immigrants that voted, if you take this — Indians got paid to vote in different places. You know, you had Indians getting paid to vote. Many, many different things. All election-changing. Not just, you know, 12 people.”

Trump said he was “very disappointed in the Supreme Court for refusing to hear any of his election “fraud” challenges.

He also claimed – falsely – that “the Supreme Court of the United States, in the Constitution, it says you can’t have local politicians setting the rules. And they set the rules. Early voting. This voting. Ballots. Many, many different things.”

After playing the clip, Cooper said, “This is like listening to Nixon drunk, rambling, except he’s not drunk. He’s just rambling and that he still is holding onto all these lies.”

Watch above via CNN.