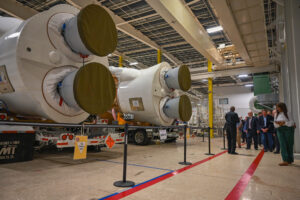 WASHINGTON — In the Biden administration’s 2022 budget proposal, the Pentagon is requesting $15.3 billion for investments in space technology, an increase of $1.8 billion over what Congress enacted in 2021, according to a new report by the consulting firm Avascent.

The bulk of the increase is for U.S. Space Force classified research and development programs, which would grow from $3.6 billion in 2021 to $4.5 billion in 2022.

DoD’s space budget is smaller than other categories in absolute terms but grows significantly in relative terms in the 2022 proposal, the report says. “FY22 national security space investment spending (procurement and RDT&E) grew by 13.8%, compared to about 1% for the rest of DoD.” RDT&E is short for research, development, testing and engineering.

The $15.3 billion in space technology investments proposed for 2022 includes:

Avascent analyst Andrew Penn said the growth in funding for space is an “acknowledgment of the threats the United States faces.”

The message from this budget is that space “can’t be a political debate,and that we need capabilities both on orbit and the ground that we don’t have today,” Penn said.

Congress will review the budget request in the coming months and likely will make some tweaks “but I would be shocked if the top line for Space Force got any meaningful reduction,” Penn said. “If anything, a slight increase would be the more likely outcome.”